My Fate to Hate! 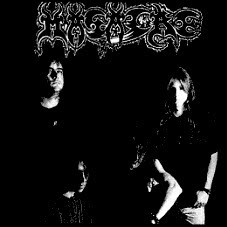 Profanatica is an American Black Metal band formed sometime in 1990. They we’re former members of Incantation. One notable member from this band is vocalist and drummer Paul Ledney, who later on formed his one-man band Havohej. Four tracks of unrelentless, blasphemous, Machiavellian hate. No doubt one of my favorite black metal bands. This “side” of Profanatica is entitled Tormenting Holy Flesh, now if that isn’t unholy enough i don’t know what is. The other band in this split is Colombian Masacre (note the single “s”). Maybe not to be confused with the Floridan Death Metal band. Pretty decent death metal band if i may say so, utilizing the famed twin vocal style, the other somewhat similar to Mitch Harris’ screeching style. Their side is entitled Ola de Violencia which translates to Wave of Violence. Now a track from each Ep was included in the locally released death metal compilation Certified Death, that’s why when i saw this on the rack of a record store i unhesitantly grabbed it, literally. Now enjoy this one my satanic followers and spread the word…

This entry was posted on December 16, 2010 by myfatetohate. It was filed under Metal .

A few more that crossed my player lately….